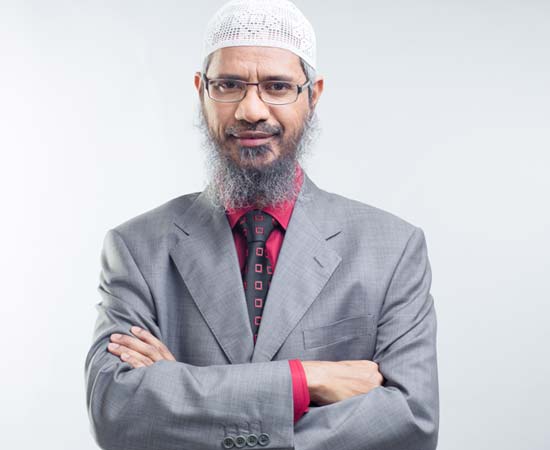 A medical doctor by professional training, Dr Zakir Naik is renowned as a dynamic international orator on Islam and Comparative Religion.

He is the Founder of the Peace TV Network the largest Religious Satellite Channel Network in the world. He is 55 years old. Dr Zakir clarifies Islamic viewpoints and clears misconceptions about Islam, using the Qur'an, authentic Hadith and other religious Scriptures as a basis, in conjunction with reason, logic and scientific facts. He is popular for his critical analysis and convincing answers to challenging questions posed by audiences after his public talks.

In the last 25 years Dr Zakir Naik has delivered over 2,000 public talks

in the USA, Canada, UK, Italy, France, Turkey, Saudi Arabia, UAE, Kuwait, Qatar, Bahrain, Oman, Egypt, Yemen, Australia, New Zealand, South Africa, Botswana, Nigeria, Ghana, Gambia, Algeria, Morocco, Sri Lanka, Brunei, Malaysia, Singapore, Indonesia, Hong Kong, China, Japan, South Korea, Thailand, Guyana, Trinidad, Mauritius, Maldives and many other countries, in addition to numerous public talks in India. In April 2012, his public talk in Kishanganj, Bihar, in India was Alhamdulillah attended by over one million people being one of the largest gathering in the world for any religious lecture by a single orator. Alhamdulillaah both his talks in Jakarta, Indonesia in April 2017 and in Kota Bharu, Kelantan, Malaysia in August 2019 attracted more than a 100,000 people. 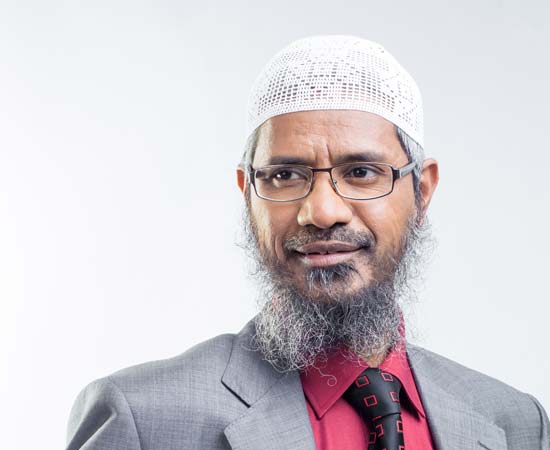 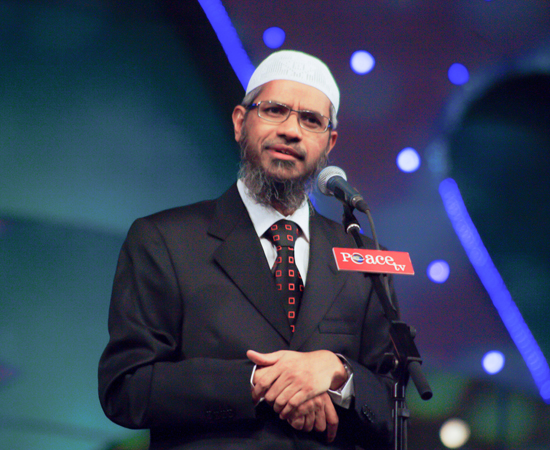 Amongst the billion plus population of India Alhamdulillah Dr Zakir Naik was ranked No. 82

By Allah’s help, he has successfully participated in several symposia and dialogues with prominent personalities of other faiths.

His public dialogue with Dr William Campbell (of USA) on the topic “The Qur'an and the Bible in the light of Science” held in Chicago, USA, in April, 2000 was a resounding success. 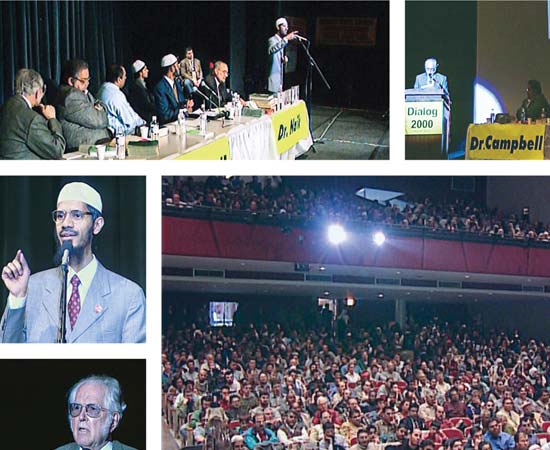 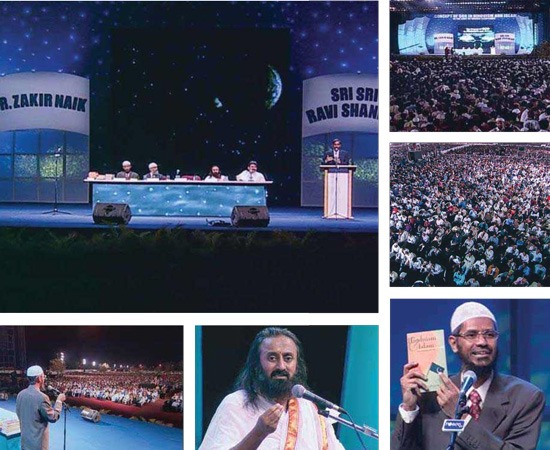 on the topic “The Concept of God in Hinduism and Islam in the light of Sacred Scriptures” held at Palace Grounds, Bangalore, on 21st Jan. 2006, was highly appreciated by people of both the faiths.

Shaikh Ahmed Deedat, the world famous orator on Islam and Comparative Religion, who had called Dr Zakir “Deedat Plus” in 1994,

presented a plaque in May 2000 with the engraving “Awarded to Dr Zakir Abdul Karim Naik for his achievement in the field of Da’wah and the study of Comparative Religion”. “Son what you have done in 4 years had taken me 40 years to accomplish, Alhamdulillah”. 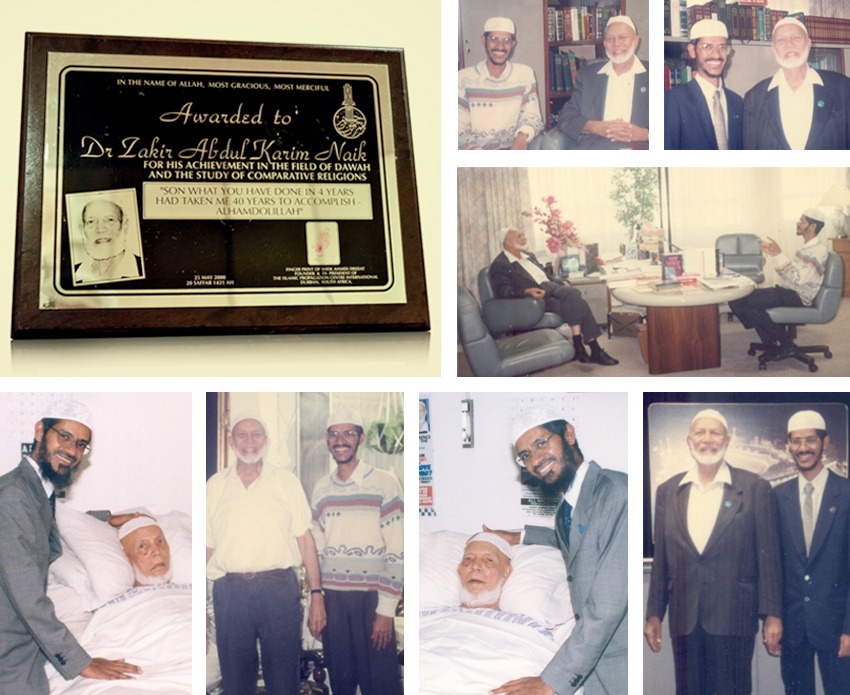 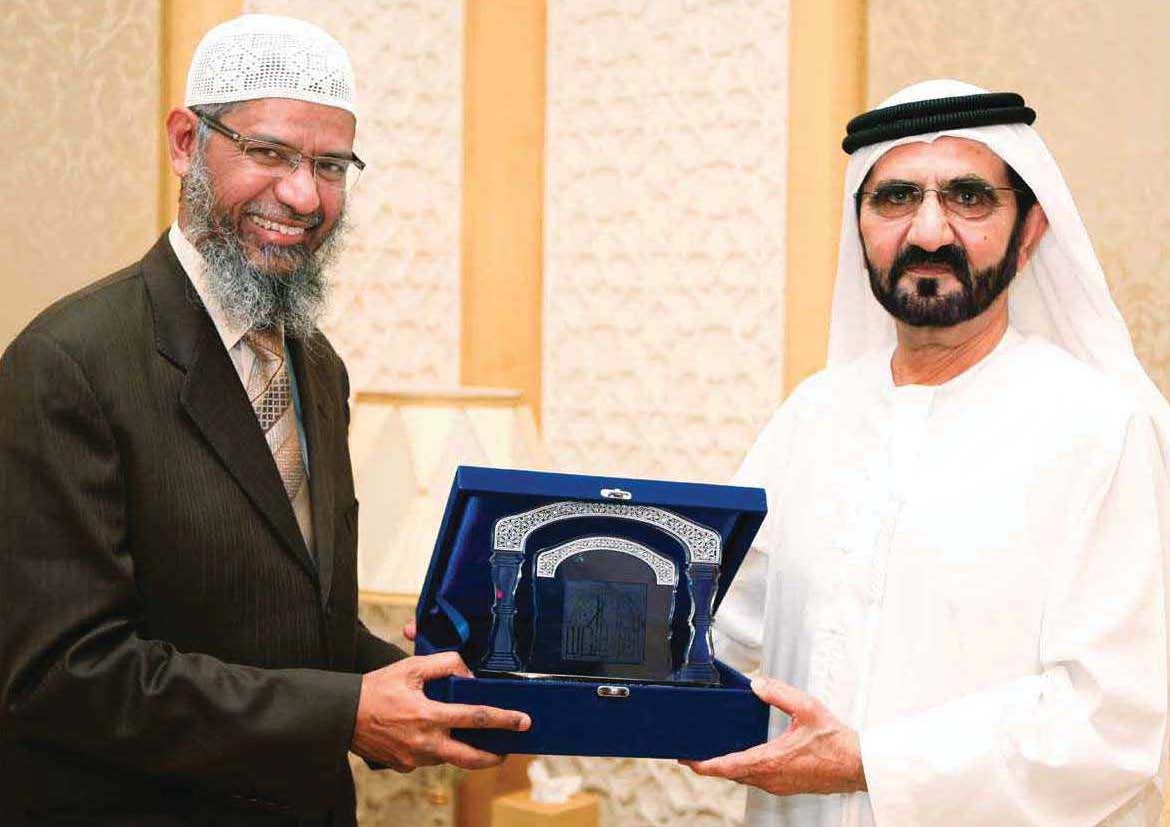 Alhamdulillah presented the prestigious Dubai International Holy Quran Award’s ‘Islamic Personality of 2013’ Award on 29th July 2013, for providing outstanding services to Islam and Muslims at a global level in Media, Education and Philanthropy, to Dr Zakir Naik, along with a cash reward of UAE Dirhams 1 million (US $272,000) which he promptly donated to start a Waqf (endowment) fund for Peace TV Network. Dr Zakir at 47 years, was the youngest recipient of the award.

conferred Dr Zakir Naik the highest award of Malaysia the ‘Tokoh Ma’al Hijrah Distinguished International Personality Award for the Year 2013’ for his significant service and contribution to the development of Islam on 5th November 2013. Also presented to Dr Zakir was a citation plaque signed by the Prime Minister of Malaysia Datuk Seri Mohd. Najib Razak. 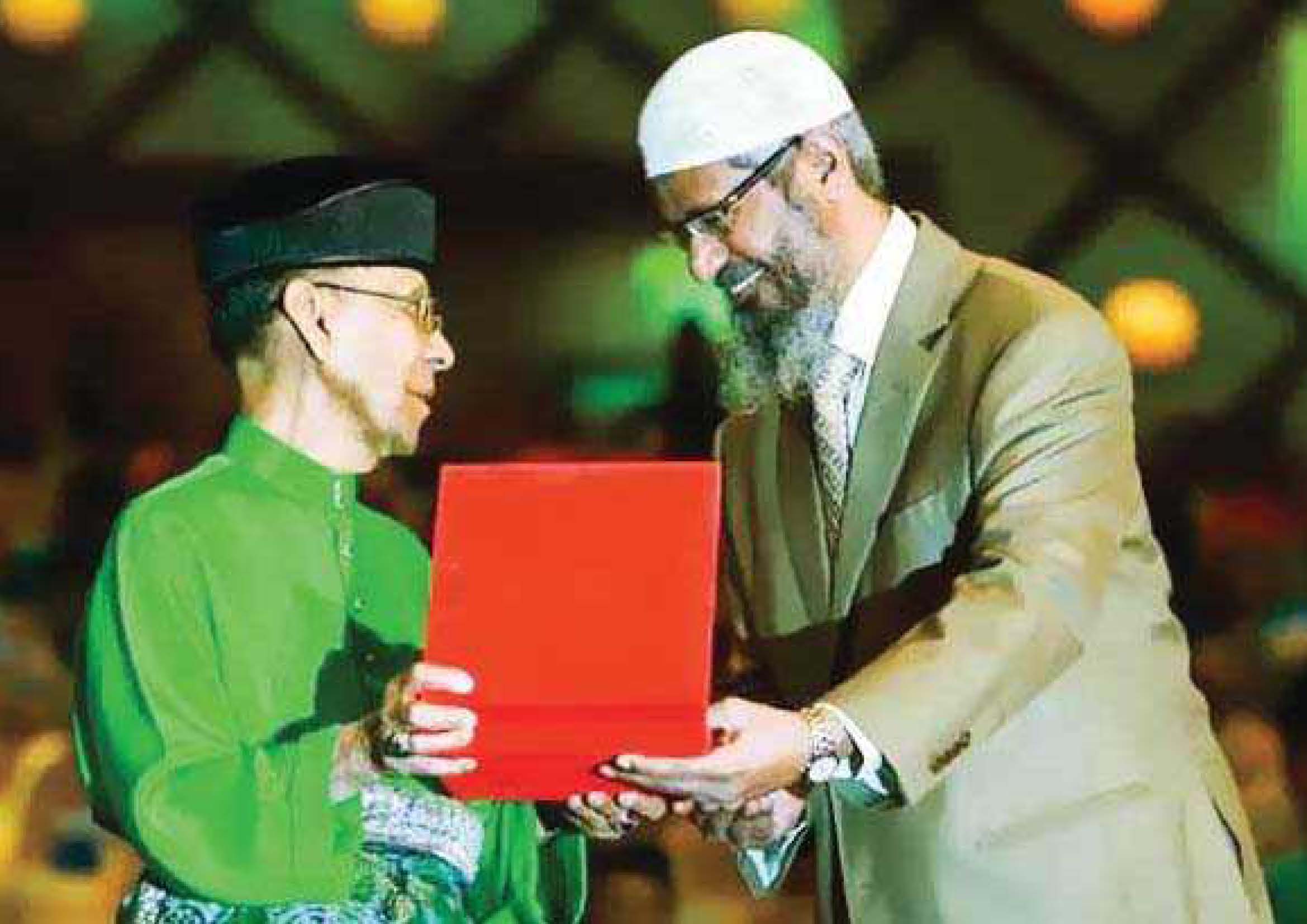 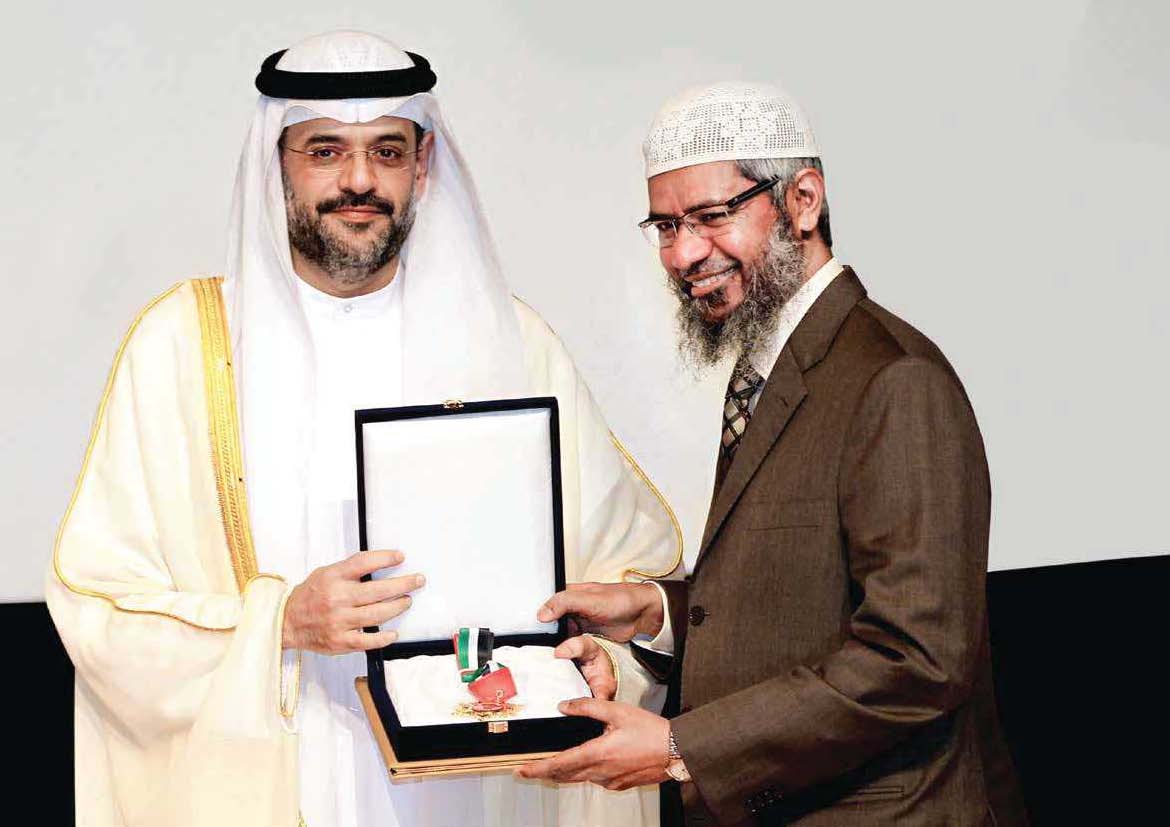 The President of The Gambia, Dr Yahya Abdul Aziz Jammeh

On 15th Oct. 2014 Dr Zakir Naik, Servant of Allah, was Alhamdulillah conferred with two prestigious accolades, The Insignia of the Commander of the National Order of the Republic of The Gambia (the highest national award in The Gambia) by the President of The Gambia Dr Yahya Abdul Aziz Jammeh as well as The Honorary ‘Doctor of Humane Letters’ (Honoris Causa), by the Governing Council of the University of The Gambia (UTG) in recognition of his outstanding contribution and dissemination of knowledge in promoting research and delivery of community services internationally. 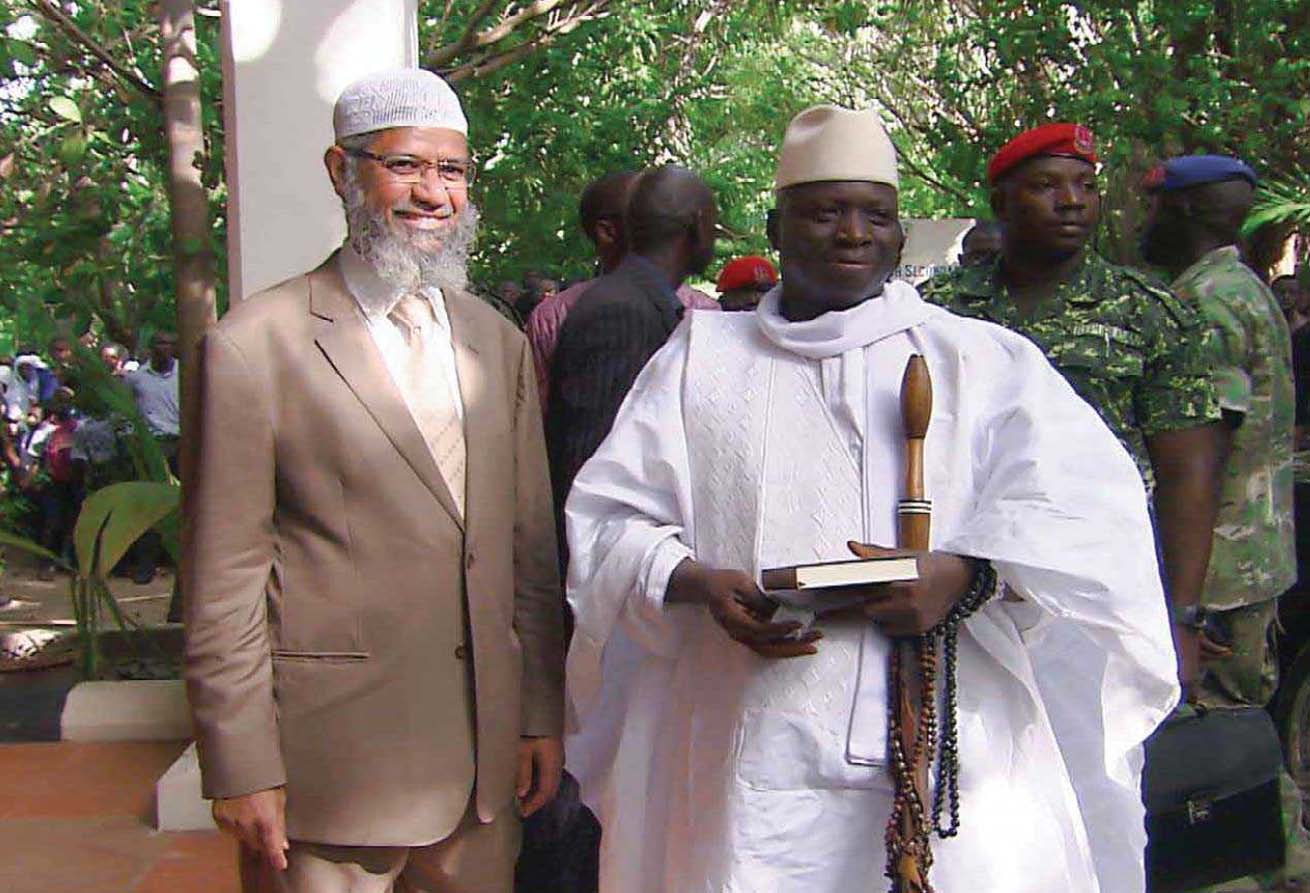 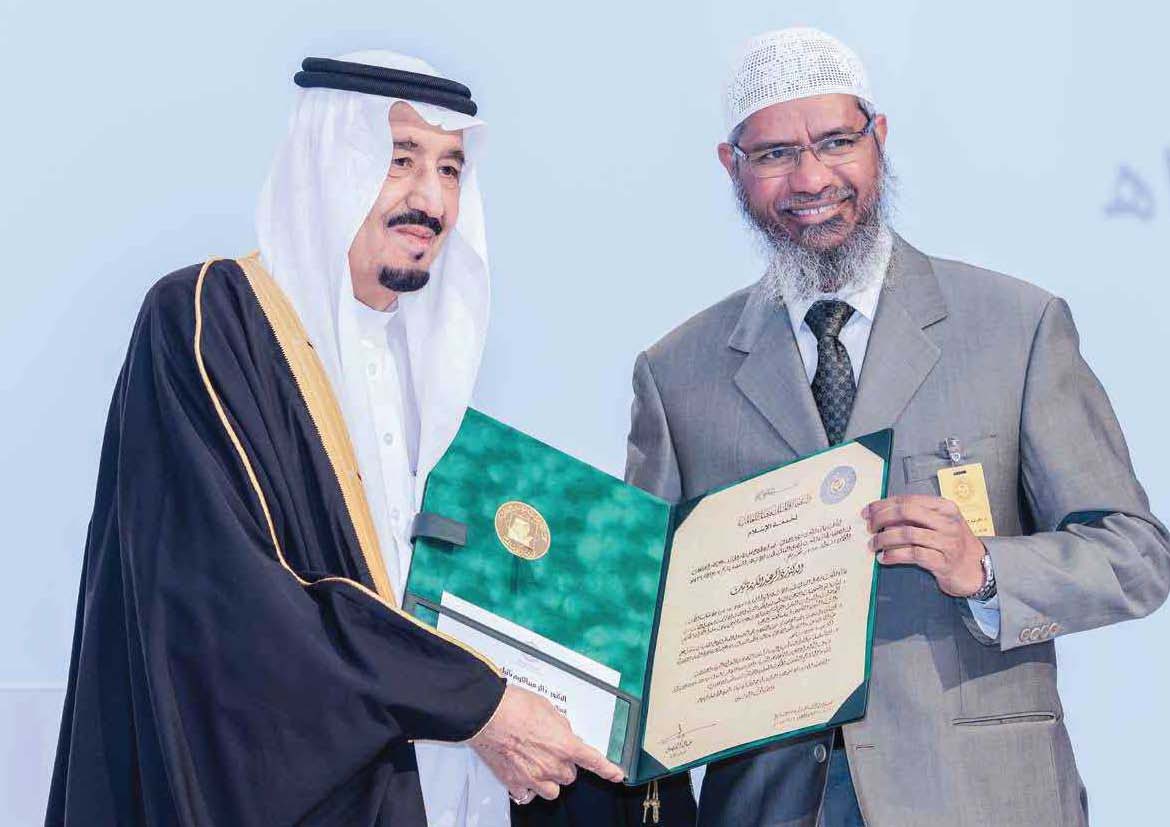 Alhamdulillah presented the prestigious ‘King Faisal International Prize’ for ‘Service to Islam’ 2015 to Dr Zakir Naik on 1st March 2015. The prize consisted of a certificate indicating the laureate’s achievements, a commemorative 24-carat 200-gram gold medal and Saudi Riyals 750,000 (US $200,000). The entire prize money was donated to the Waqf for Peace TV Network by Dr Zakir Naik.

Dr Zakir Naik Alhamdulillah has more than 22.6 million followers on his Facebook, 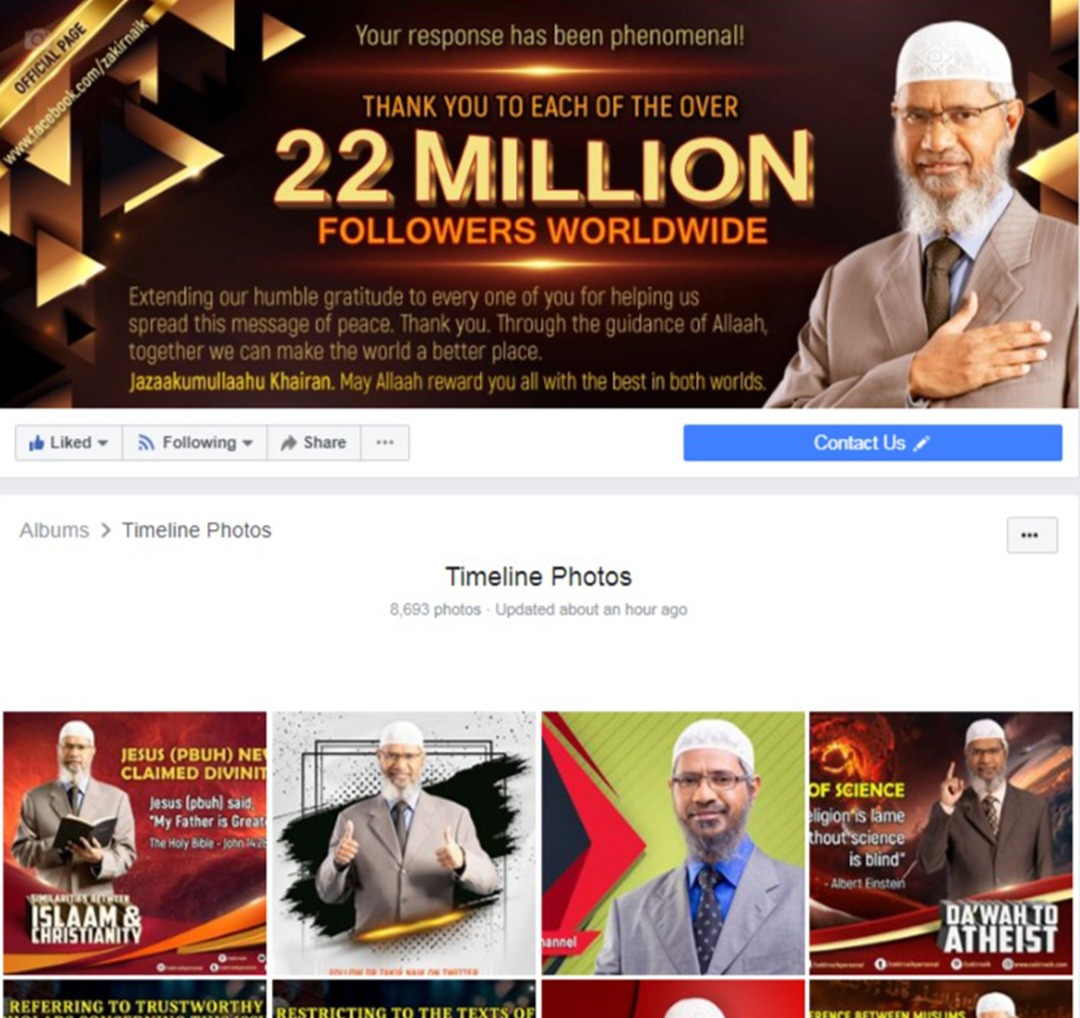 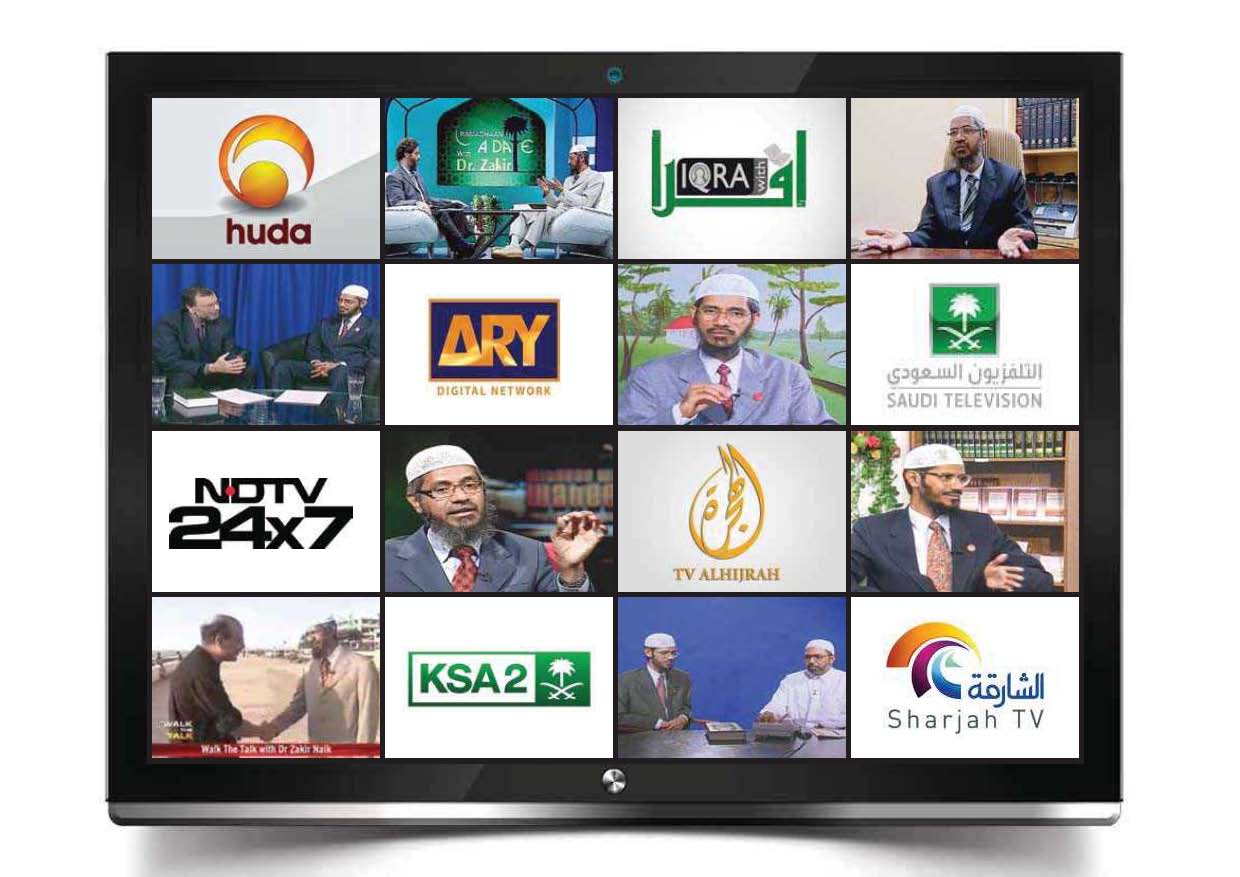 Dr Zakir Naik appears regularly on many international TV channels in more than 175 countries of the world.

More than a hundred of his talks, dialogues, debates and symposia are available on DVDs. He has authored many books on Islam and Comparative Religion.

The idealogue and driving force behind Peace TV Network is Dr Zakir Naik.

He launched Peace TV English, in January 2006, it being the largest watched ‘Islamic’ as well as ‘any Religious’ Satellite TV channel in the world, with over 100 million viewership of which 25% are Non-Muslims. In its footsteps he launched Peace TV Urdu in June 2009, Peace TV Bangla in April 2011 and Peace TV Chinese in December 2015.The Peace TV Network was the first High Definition Religious Satellite Channel Network in June 2009. The Peace TV Network Alhamdulillah in 2016 reached an estimated viewership of more than 200 million viewers. In Sha Allah, he plans to expand Peace TV Network to cover the ten major languages of the world. 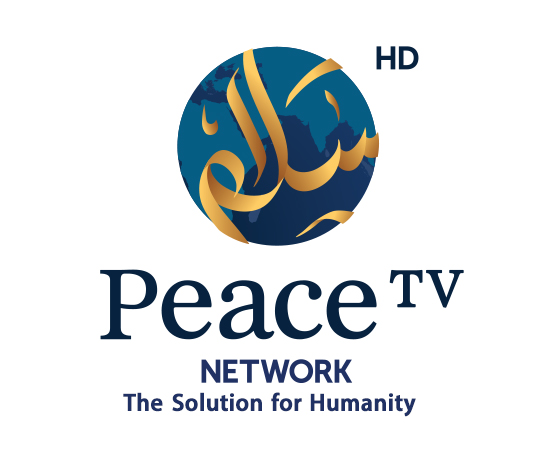 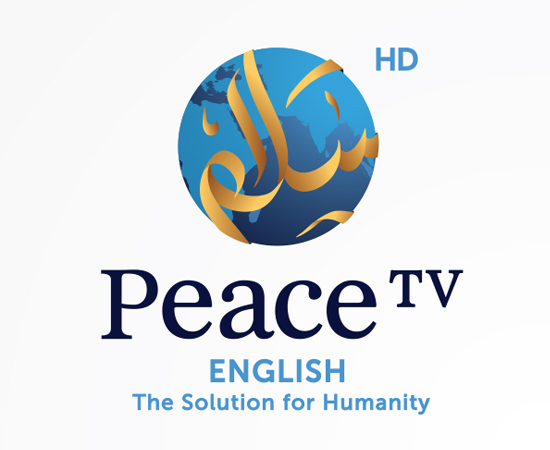 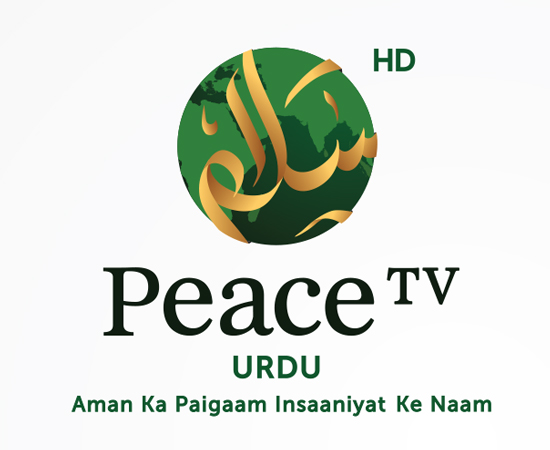 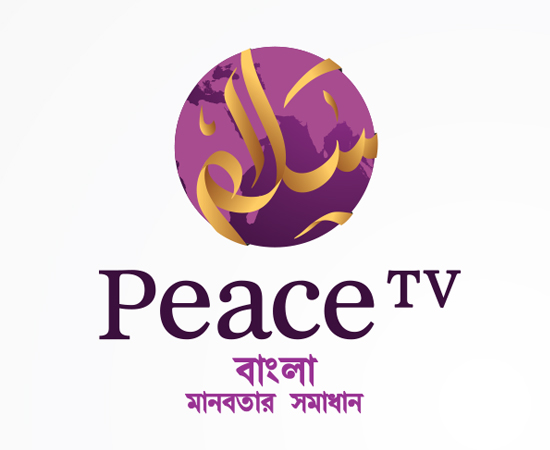 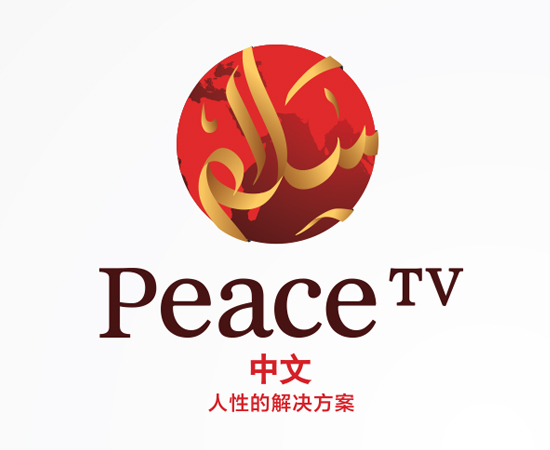 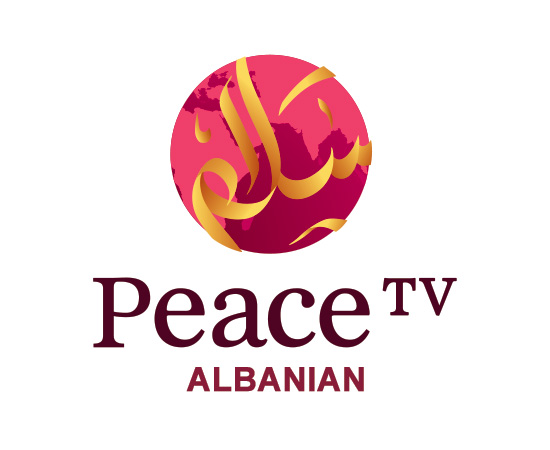